About 25 per cent of us will experience the effects of anxiety disorders at some point in our lives, with sometimes dire repercussions for friends, family and our own well-being.

The cumulative lifetime prevalence of all stress-related disorders is difficult to estimate but is probably higher than 30%.

Yet little is known about the molecular mechanisms in the brain which contribute to stress-induced anxiety.

Nerve cells reach out and communicate with each other at junctions called synapses that release chemicals to promote anxiety.

A team of neuroscientists at the University of Leicester, UK, in collaboration with researchers from Poland and Japan, discovered a new ‘chemical pathway’ that triggers our response to highly stressful and traumatic events.

The discovery of a critical and previously unknown pathway in the brain that is linked to our response to stress is announced today in the journal Nature. The advance offers new hope for targeted treatment, or even prevention, of stress-related psychiatric disorders.

Dr Robert Pawlak, from the University of Leicester who led the UK team, said: “Stress-related disorders affect a large percentage of the population and generate an enormous personal, social and economic impact. It was previously known that certain individuals are more susceptible to detrimental effects of stress than others.

Dr Pawlak commented: “Understanding neural bases of stress, fear and anxiety is of immense importance to modern society. The most dramatic form, posttraumatic stress disorder (PTSD) is characterised by cognitive impairment, depression, fear, anxiety, and may eventually lead to suicide.

“Understanding the neural mechanisms of PTSD, depression and anxiety disorders could reduce the personal and societal impact through development of more efficient therapies. This project looks at cellular mechanisms involved in experience-induced neuronal plasticity underlying learning, fear and anxiety.” 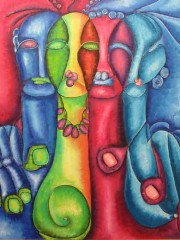 Acording to Dr John Kenworthy, stress is the way our bodies and minds react to something which upsets our normal balance in life. Stress is how we feel and how our bodies react when we are fearful or anxious. Some level of stress has some upside to mind and body function to enable us to react in a positive way. Too much stress though, is both harmful to the body and our performance.

It is essential to know how our brain responds to the stimuli which trigger an anxiety response so that you are equipped to deal appropriately with anxiety.

Let me highlight the key areas of your brain that are involved, and then I will explain what happens inside the brain.

The Thalamus is the central hub for sights and sounds. The thalamus breaks down incoming visual cues by size, shape and colour, and auditory cues by volume and dissonance, and then signals the cortex.

The cortex then gives raw sights and sounds meaning enabling you to be conscious of what you are seeing and hearing. And I’ll mention here that the prefrontal cortex is vital to turning off the anxiety response once the threat has passed.

The amygdala is the emotional core of the brain whose primary role is to trigger the fear response. Information passing through the amygdala is associated with an emotional significance.

The bed nucleus of the stria terminals is particularly interesting when we discuss anxiety. While the amygdala sets off an immediate burst of fear whilst the BNST perpetuates the fear response, causing longer term unease typical of anxiety.

The hippocampus is your memory centre storing raw information from the senses, along with emotional baggage attached to the data by the amygdala.

Now we know these key parts, what happens when we are anxious, stressed or fearful?

Anxiety, stress and, of course, fear are triggered primarily through your senses:

Sight and sound are first processed by the thalamus, filtering incoming cues and sent directly to the amygdala or the cortex.

Smells and touch go directly to the amygdala, bypassing the thalamus altogether. (This is why smells often evoke powerful memories or feelings).

Any cues from your incoming senses that are associated with a threat in the amygdala (real or not, current or not) are immediately processed to trigger the fear response. This is the expressway. It happens before you consciously feel the fear.

The hippothalmus and pituitary gland cause the adrenal glands to pump out high levels of the stress hormone coritsol. Too much short circuits the cells of the hippocampus making it difficult to organize the memory of a trauma or stressful experience. Memories lose context and become fragmented.

Your senses become hyper-alert, freezing you momentarily as you drink in every detail. Adrenaline floods to the muscles preparing you to fight or run away.

The brain shifts focus away from digestion to focus on potential dangers. Sometimes causing evacuation of the digestive tract thorough urination, defecation or vomiting. Heck, if you are about to be eaten as someone else’s dinner why bother digesting your own?

Fear is a good, useful response essential to survival.

However, anxiety is a fear of something that cannot be located in space and time.

Most often it is that indefinable something triggered initially by something real that you sense, that in itself is not threatening but it is associated with a fearful memory.

And the bed nucleus of the stria terminals perpetuate the fear response. Anxiety is a real fear response for the individual feeling anxious. Anxiety can be debilitating for the sufferer.

How are stress-related environmental signals translated into proper behavioural responses?

Dr Robert Pawlak, from the University of Leicester who led the UK team, found that the emotional centre of the brain – the amygdala – reacts to stress by increasing production of a protein called neuropsin.

This triggers a series of chemical events which in turn cause the amygdala to increase its activity. As a consequence, a gene is turned on that determines the stress response at a cellular level.

“We then examined behavioural consequences of the above series of cellular events caused by stress in the amygdala,” said Dr Pawlak. “Studies in mice revealed that upon feeling stressed, they stayed away from zones in a maze where they felt unsafe. These were open and illuminated spaces they avoid when they are anxious.”

“However when the proteins produced by the amygdala were blocked – either pharmacologically or by gene therapy – the mice did not exhibit the same traits. The behavioural consequences of stress were no longer present. We conclude that the activity of neuropsin and its partners may determine vulnerability to stress.” Neuropsin was previously discovered by Professor Sadao Shiosaka, a co-author of the paper. This research, for which the bioinformatics modelling was done by Professor Ryszard Przewlocki and his team, has for the first time characterized its mechanism of action in controlling anxiety in the amygdala.

The first author, Benjamin Attwood, sponsored by Medisearch, took 3 years off from his medical studies curriculum to complete the necessary experiments. He commented: “It has been a thoroughly absorbing project to uncover how our experiences can change the way we behave. Hopefully this will lead to help for people that have to live with the damaging consequences of traumatic experiences.”
Dr Pawlak added: “We are tremendously excited about these findings. We know that all members of the neuropsin pathway are present in the human brain. They may play a similar role in humans and further research will be necessary to examine the potential of intervention therapies for controlling stress-induced behaviours.”
“Although research is now needed to translate our findings to the clinical situation, our discovery opens new possibilities for prevention and treatment of stress-related psychiatric disorders such as depression and posttraumatic stress disorder.”

Dr. Ev Damigo; PhD - March 22, 2019
0
Leading companies invest more in digital than their less well-performing counterparts do, according to McKinsey’s latest digital survey. They also invest by targeting each dimension in...

Automation: The Future of Work [videos]

Dr. Ev Damigo; PhD - April 15, 2019
0
Customer in the Center Identify what’s most important to your customers. Seth Godin is right: You want to focus your energy on pleasing your truly rewarding customers....

The Art of Differentiation: 5 Perspectives on Developing Unique Business Models

Your Mindset: The Gateway to Success [videos+article]

The Path to Growth and Profit [videos+article]